My trusty 2011 Macbook Air started to die recently, and since I'm getting more and more frustrated with OS X (neutering root in El Capitan, for example) I bit the bullet and picked up a Thinkpad X250 on a nice deal and switched to linux full-time. My distro of choice is Debian 8.3 ("Jessie") which is very nice under the hood,but the out-of-the-box UI is a little bit unpolished. Over the last week or so I spent some time bashing it into shape, and since it wasn't so simple I thought I'd share the main steps with anyone else out there.

The first thing is that the X250's screen is 1920x1080 but only 12.5 inches and when you first boot up the text appears to be scaled at 96dpi - and it's pretty tiny. Annoyingly the screen is not high-res enough for the standard HiDPI/Retina approach - scaling everything 2x - to work, everything looks a little too big. Getting something halfway is involves fiddling around with a lot of settings, and this is compounded by the fact that various apps and desktops have different ways of handling it.

Note that this is mostly for XFCE - some of the other environments look and behave semi-OK (for example Cinnamon is reasonably usable but it eats my battery for breakfast) but I prefer the look and feel of XFCE even if I have to jump through a couple of hoops to get it to play nice.

First thing's first - my display's DPI setting was being incorrectly detected and I didn't have an xorg.conf to modify, so needed to generate one. Logout, switch to a terminal prompt, kill the lightdm process and use Xorg to generate the file:

Then open up /etc/X11/xorg.conf and edit the Monitor section's DisplaySize - the ThinkPad X250's size in millimetres, so since the X250's screen is 276mm x 155mm we can set it to the following:

After you reboot X11 will have loaded with the correct DPI setting. Things will still look a little wonky - but we're on the right track so sit tight and keep going.

If you have Chrome or Chromium installed you'll notice that the UI elements and fonts are pretty huge - this is because it's detected that you have a high DPI and has defaulted to scaling things by 2x. You'll need to edit the launcher so that it uses the --force-device-scale-factor to use 1.3 (a number I reached by pure trial-and-error):

Change the following line in /usr/share/applications/google-chrome.desktop:

If you use Chromium you can make a similar change to /usr/share/applications/chromium.desktop. So now Chrome will look a little saner - I also copied over the Times and Helvetica Neue fonts from my Mac and downloaded  Source Code Pro to make things look even better.

After all this here's what Chrome running with the updated fonts looks like: 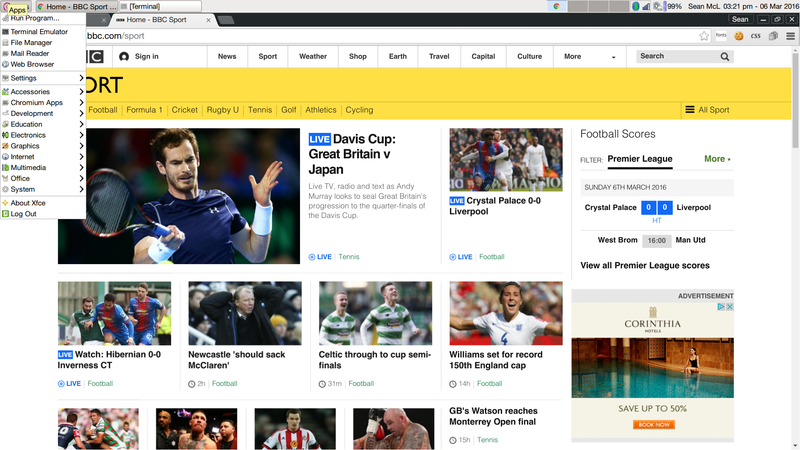 Qt uses some slightly different settings - you need to ensure that ~/.fonts.conf is as appears below:

To keep the layout consistent I opened up Settings -> Qt 4 Settings, went to the fonts tab and set it as follows: 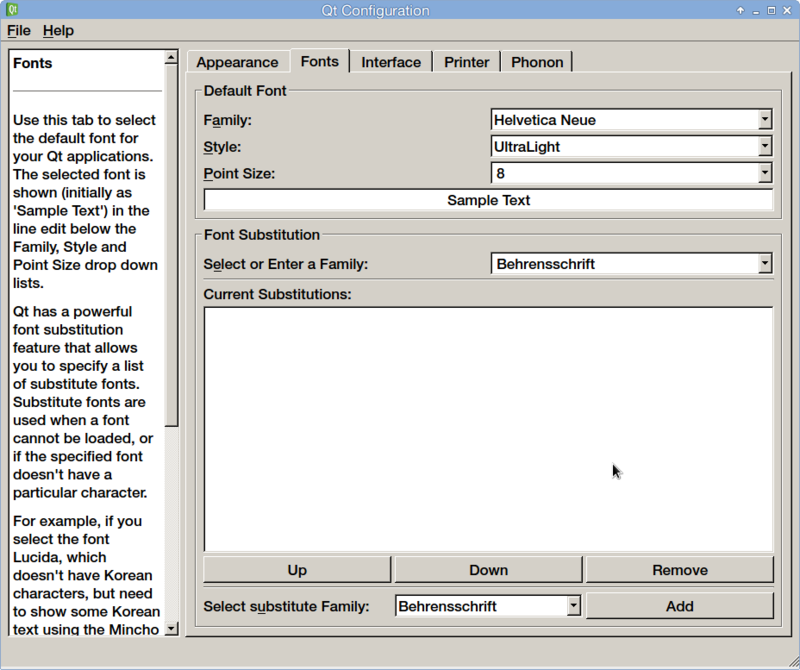 I found that video playback was pretty choppy - to resolve it I had to just uncomment out a single option in xorg.conf:

Now that things look a little better we can fix the next couple of things that bothered me. By default there's a little area in the corner with counts as a "right" click that personally I don't use. Disabling it was as simple as commenting out the SoftButtonAreas and SecondarySoftButtonAreas in /etc/X11/xorg.conf.d/50-synaptics.conf

There's another couple of problems - the trackpad is extremely fast and sensitive by default, and additionally scrolling is too fast and has a sort of inertia that irritates me (I found I'd end up accidentally zooming in/out a lot). Scrolling can be tamed by adding the VertScrollDelta, CoastingSpeed and CoastingFriction sections to the same 50-synaptics.conf file as above, under the Driver "synaptics" section:

For me adding the MaxSpeed option (which controls pointer sensitivity/speed) to 50-synaptics.conf didn't work, so I added the following to my ~/.xinitrc:

The final touchpad tweak is to prevent it from registering touches as clicks while you're typing. XFCE has a setting that looks like it should work, but it leaves an agonising 2 second delay after you type before it enables the touchpad again. There's a handy utility to alter this which is syndaemon.

This can also go  into .xinitrc.

By default the power management settings are a bit of a farce - my battery was exhausted after a handful of hours use even though it's pretty hefty. Strangely it seems that power management is still a bit of a ridiculous scene, I'd last operated a Linux laptop back in 2007 - a Thinkpad T40 - and sadly the out-of-the-box power management is pretty dire. There's a handful of useful applications which can help with individually tweaking things - like powertop - but thankfully there's a useful utility called tlp which appears to improve things significantly with only a little config required.

First you need to add the correct depot to your /etc/apt/sources.list - so add the following line to the end

And install the tlp and thinkpad packages:

I still find power management a little unreliable - when closing the lid the system doesn't always sleep/suspend, the battery charge is sometimes reported incorrectly (it was stuck at "52%" for a while, which I didn't notice before it died on me). In addition XScreenSaver appears to mess things up too - when I enabled its power management settings it would kill performance after resuming from sleep (with the xorg process consuming >100% of the cpu). Disabling this altogether was fine.

Sound through the built-in speakers worked out of the box for me. However I have a little Bose Soundlink II bluetooth speaker which I like to use that's a little bit tricky. After pairing in blueman (which weirdly was a little bit trial-and-error) I wasn't sure how to get sound to play out of it. The solution was to install PulseAudio Volume Control, a utility that provides a nice graphical interface to controlling PulseAudio:

Then start the process that's playing the sound - so for me it's Chrome as I was watching Netflix. Open up pavucontrol, switch to the Playback tab find your application and select the bluetooth speaker from the dropdown.

This being manual is a little bit frustrating but it's actually a minor step-up from OS X - where sometimes some apps wouldn't output sound to the speaker.

After the above tweaks my experience on Debian as a user is roughly on par with OS X (as a developer, it's far better of course). However there are still a number of things I am missing which would make my life a lot better.

Hopefully I can pick away at those.